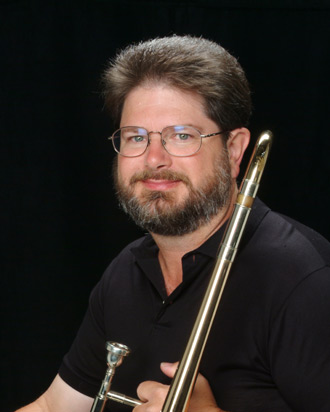 Alvin Veeh began studying the trombone with Clifton Plog at the age of 10, and he became a student of Byron Peebles at age 14. During his years in junior high and high school, Al won numerous competitions and was involved in many local honor bands and orchestras. He also spent several summers at Interlochen and ISOMATA. After graduating from high school, Alvin attended the University of Southern California and studied with Robert Marsteller, Lewis Van Haney, Jeffrey Reynolds and Terry Cravens. He graduated from USC in 1979 and received the Robert Marsteller Award for Outstanding Brass Player.

Alvin is a member of the Los Angeles Opera Orchestra, Long Beach Symphony and the Los Angeles Master Chorale Orchestra. He also performs regularly with the Pacific, Pasadena and Santa Barbara Symphonies, as well as with the Pasadena Pops and Los Angeles Chamber Orchestra. Alvin has served on the faculty at Cal State Fullerton and Cal Arts. You can hear Al on solo recordings Variations on “St. Bone” and Partita on “Hammering” by William Schmidt. He is also active in the film and recording industry working with many of the top composers in Los Angeles.