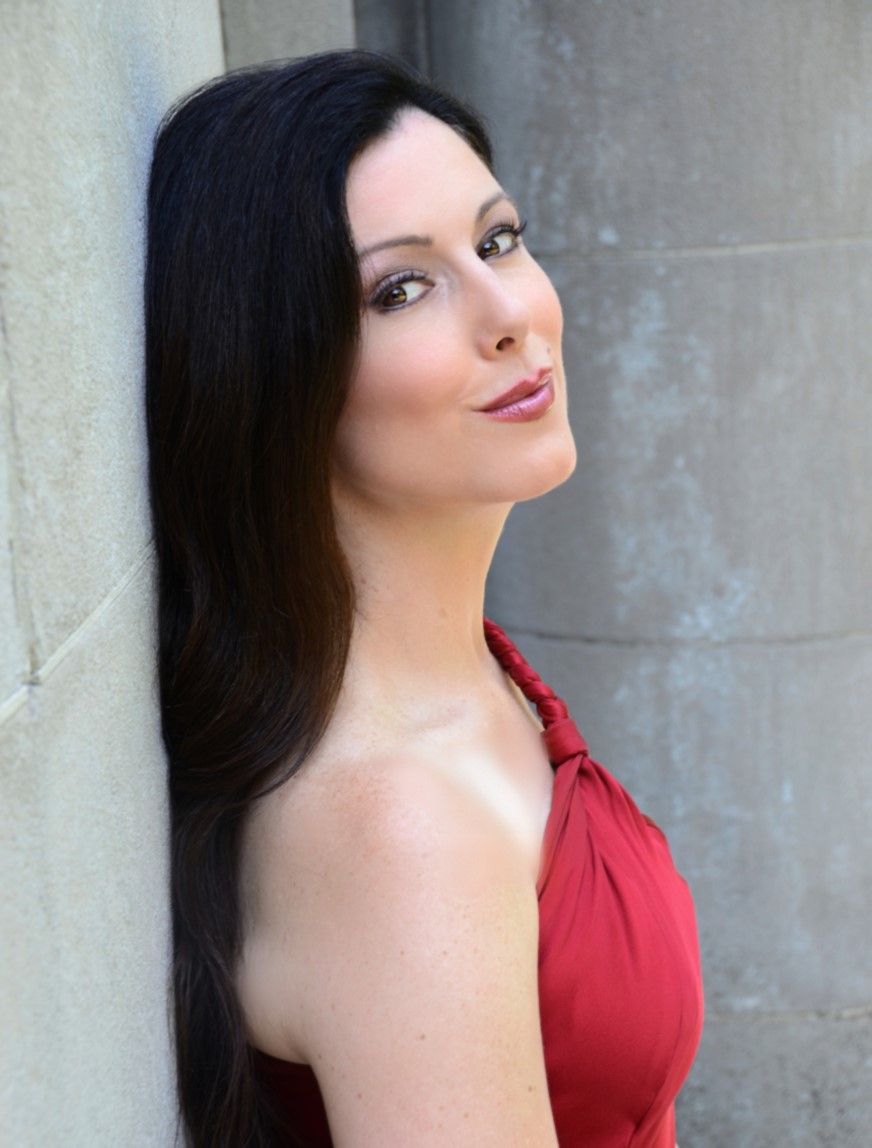 In collaboration with artists ranging from Plácido Domingo to Sting, Camille Zamora has garnered acclaim for her “dramatic and nuanced” (The New York Times) interpretations of repertoire ranging from Mozart to tango. Equally, at home in concert, recital, and on the operatic stage, Camille is known for her “dignity and glowing sound” (The New York Times) in “luminous, transcendently lyrical” performances (Opera News) that “combine gentility and emotional fire” (The Houston Chronicle).

This past season featured Camille’s Kennedy Center debut, performances at the U.S. Capitol with Yo-Yo Ma, concerts of classic tango with Fort Worth Symphony and Florida Orchestra, and five new operatic roles, including a tour de force double-bill of La Voix Humaine and I Pagliacci with Opera Columbus. She also re-created the principal soprano role of Lucia in Hindemith’s The Long Christmas Dinner with American Symphony Orchestra at Lincoln Center, the live recording of which topped the New York Times’ Classical Playlist and was chosen one of Opera News’ Best Recordings of the Year.

Other recent highlights include music of Enrique Granados with Yo-Yo Ma and Cristina Pato in 2016 documentary film The Music of Strangers by Academy Award winner Morgan Neville; the narrated concert Twin Spirits: Robert and Clara Schumann with Sting, Nathan Gunn, and Joshua Bell at Lincoln Center and LA’s Music Center; and concerts of American Songbook classics by Gershwin, Berlin, Ager, and Arlen with Late Show bandleader Jon Batiste in Los Angeles and New York City for the Spring 2016 opening of the new Steinway Hall.

Camille’s operatic appearances include Donna Elvira in Don Giovanni at Anchorage Opera; Ilia in Idomeneo at Boston Lyric Opera; Despina in Così fan tutte at Glimmerglass Opera and Virginia Opera; Rosita in Luisa Fernanda at LA Opera; Elle in La Voix Humaine at Auckland Opera, Phoenicia Festival, Opera Columbus, and Bay Chamber Festival; Mimì in La bohème at Opera on the James; Nedda in I Pagliacci at Opera Columbus; Amore/Valetto in L’incoronazione di Poppea at Houston Grand Opera; The Countess in The Marriage of Figaro at On Site Opera; and Europa in Die Liebe der Danae, The Countess in Die Verschworenen, and Masha in The Chocolate Soldier at Bard Summerscape. Other signature roles include Blanche in Dialogues des Carmélites, The Governess in The Turn of the Screw, and the title roles in Susannah, Alcina, and Anna Bolena, of which the Houston Chronicle recently wrote, “Camille Zamora digs deep into Anna Bolena with the richness of her colorful and unwaveringly powerful soprano instrument… a consummate actress whose ability to get inside her character is phenomenal.”

In concert, Camille has appeared with the Orchestra of St. Luke’s, London Symphony Orchestra, Guadalajara Symphony, Aberdeen Festival Orchestra, Boston Festival Orchestra, Rochester Philharmonic, and in live broadcasts on NPR, BBC Radio, Deutsche Radio, and Sirius XM. Highlights on the concert stage include Brahms’ Liebeslieder with Leon Fleisher at Aspen Music Festival, Beethoven’s Mass in C at Alice Tully Hall, Mahler’s Symphony No. 2, The Resurrection with Chattanooga Symphony, and Schubert Lieder for the opening night of American Ballet Theater in a performance The New York Post called “one of the best received moments of the evening… quiet, monumentally serene Schubert art songs, beautifully rendered by soprano Camille Zamora.” Camille has sung Bach’s Magnificat at Carnegie Hall, and, also at Carnegie Hall, the premiere of Christopher Theofanidis’ Song of Elos, a performance she repeated at the American Academy in Rome. She made her Lincoln Center Festival debut in Bright Sheng’s Poems from the Sung Dynasty for Soprano and Orchestra in a performance praised by The New York Times as “dramatic and nuanced,” and premiered GRAMMY-winner Robert Aldridge and Herschel Garfein’s Away but Not Far Away as part of The AIDS Quilt Songbook @ 20 at Cooper Union’s Great Hall. A champion of contemporary music, Camille performed Aaron Jay Kernis’ Simple Songs for Soprano and Orchestra at the Bowdoin Festival under the baton of the composer, and works of Ricky Ian Gordon with the composer at the piano at Lincoln Center. She has premiered works by Franghiz Ali-Zadeh, Bernd Franke, Roberto Sierra, Henry Brant, and Richard Wargo with companies including Spoleto Festival USA, New York Festival of Song, Continuum, and American Opera Projects. In addition to the award-winning original language recording of Hindemith’s The Long Christmas Dinner (Bridge Records), Camille’s recordings of twentieth and twenty-first century works include The Music of Chris Theofanidis (Albany Records), Strauss’ Die Liebe der Danae (ASO), New Music with Guitar / David Starobin (Bridge) and the world premiere recording of Scott Gendel’s “At Last” with Yo-Yo Ma on An AIDS Quilt Songbook: Sing for Hope (Naxos/GPR).

A graduate of The Juilliard School, Camille is the Co-Founder of Sing for Hope, a leading arts non-profit that mobilizes artists in volunteer service and presents projects – such as NYC’s Sing for Hope Pianos – that make the arts accessible to all. She has presented and performed at Fortune Most Powerful Women Summit, Skoll World Forum, Opera America, Aspen Ideas, and The UN, and is a regular arts and culture contributor to The Huffington Post. A 2016/17 Kennedy Center Citizen Artist, Camille has been honored with a World Harmony Torch-Bearer Award, a Congressional Hispanic Caucus Recognition, a 100 Hispanic Women Community Pride Award, and been named one of the Top 50 Americans in Philanthropy by Town & Country, NY1’s New Yorker of the Week, and one of CNN’s Most Intriguing People.