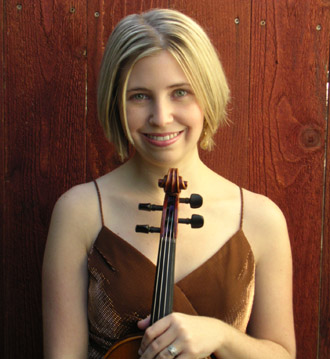 Award-winning violinist Carrie Kennedy has been the featured soloist with orchestras throughout the United States including the San Antonio, Richardson, University of Southern California, Torrance, Suburban, Brevard Festival, Clear Lake, Westchester, Solano and Magic Valley symphonies, and has performed concerts around the world.

She joined the Los Angeles Chamber Orchestra in January 2012. Currently, she is also a member of the New West, Long Beach and Pasadena Symphonies, and the Fiato Quartet. She also performs with Musica Angelica Baroque Orchestra, Pacific Symphony and the Santa Barbara Chamber Orchestra. She has toured with the Musica Angelica Baroque Orchestra in South America, the Percy Faith Orchestra in Japan, the Fiato Quartet in Costa Rica and with Andrea Bocelli. She has also recorded music for many commercials, motion pictures and records.

Kennedy is an alumnus of intensive chamber music programs at Tanglewood and Amelia Island where her quartet was coached by the American, Guarneri, Emerson, and Takacs quartets. While at Tanglewood, she served as concertmaster under Rafael Fruhbeck de Burgos and was broadcast live on New York’s WQXR in Strauss’s Ein Heldenleben. She has also spent summers at the International Holland Music Sessions where she studied with Hermann Krebbers, the Santander Master Courses in Spain with Zakhar Bron, and the London Master Classes where she studied with György Pauk and was chosen to have her lesson filmed by Online Classics for a television documentary on the master classes.

Carrie resides in Pasadena with her husband and fellow LACO violinist Joel Pargman.