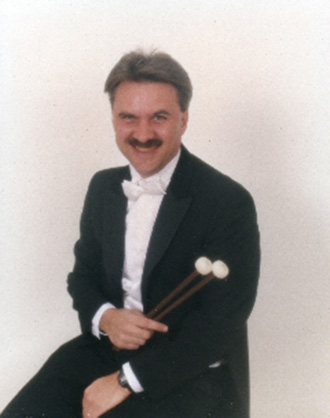 Gary has performed the Philip Glass Fantasy for Two Timpanist with The Los Angeles Philharmonic, The San Francisco Ballet, and The Long Beach Symphony. He has freelanced in Southern California orchestras such as The Los Angeles Philharmonic, San Diego Symphony, Pasadena Pops, Pacific Symphony, Santa Barbara Chamber Orchestra, Symphony in the Glen, and Redlands Bowl Orchestra presentations. Gary teaches private percussion lessons and is frequently heard in chamber music concerts throughout San Bernardino, Los Angeles, and Orange counties. In 1987 and 1988 Mr. Long was Principal Timpanist of the Nova Filarmonia Portuguesa, a chamber orchestra based in Lisbon, Portugal.

He received his musical training at the Juilliard School in New York City where he studied with Roland Kohloff and Buster Bailey, of the New York Philharmonic, receiving his Master of Music degree. He earned a Bachelor of Music from the University of Oregon in 1985 and was a student of Charles Dowd.

Gary resides in Redlands with his cellist wife Becky, who teaches elementary music in the Redland’s School District, and his two aspiring musician daughters: Madeline and Hannah. He looks forward to future days when he’ll be able to continue to perform, but also spend more time pursuing his other interests: Percussion Instrument Refurbishing, golfing, gardening, woodworking, and collecting as many percussion instruments as he can fit into his garage!