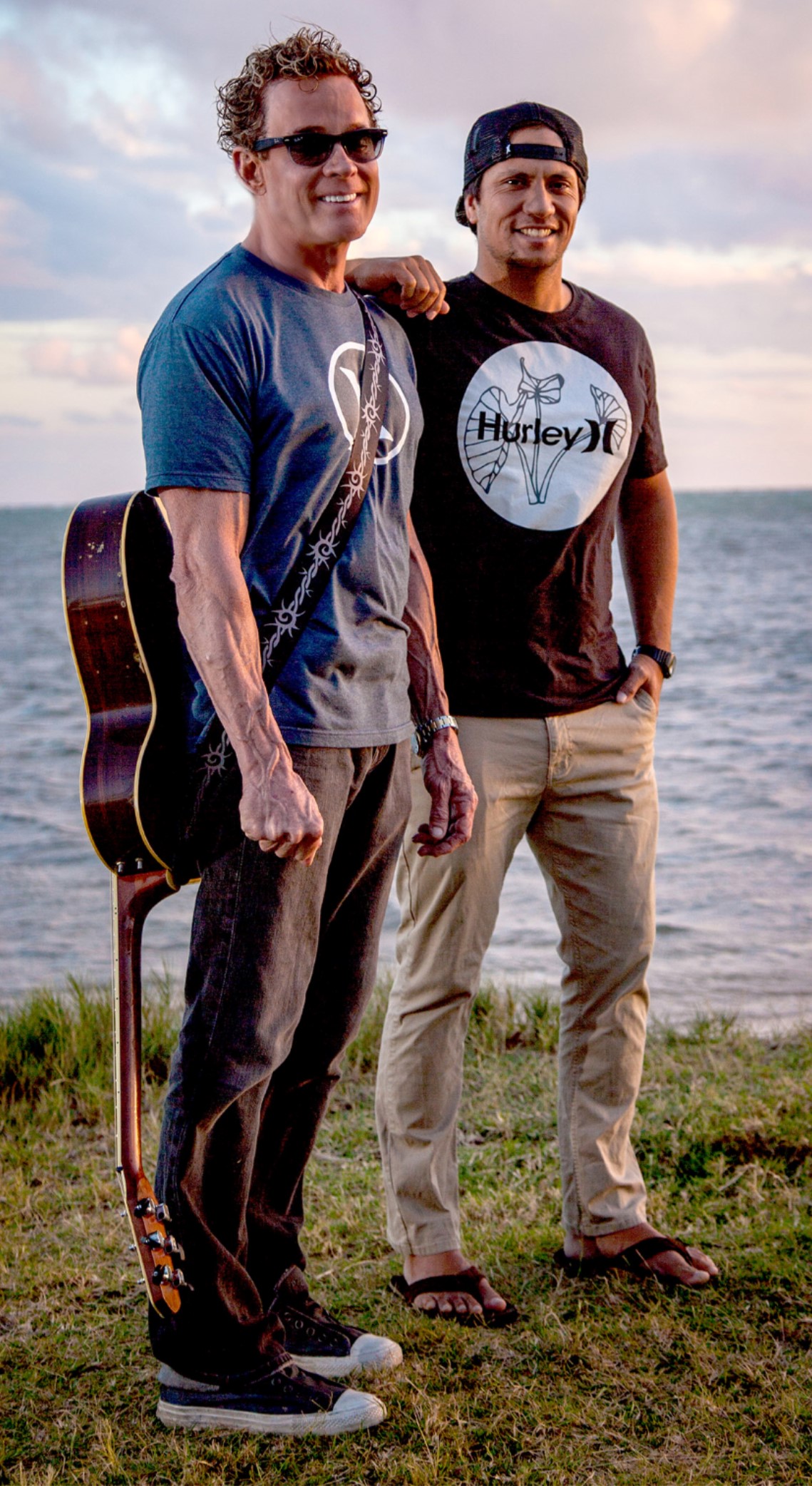 Definition of the word HAPA :

1) Hawaiian word for “half”

3) A Musical Duo from Hawaii that consists of one member of South Pacific Ancestry and one guy from New Jersey.

Often encapsulated as the “Sound of Maui” or the “Soundtrack of Hawaii” the music and sound of the group HAPA evokes a place that many people have referred to as heavenly. The sound? Expect to hear hypnotic, liquid guitar runs woven around clear, tenor Hawaiian vocals and immaculate harmonies driven by poetic lyrics exulting the rapture of the Hawaiian landscape, History and Mythology. Just add to this a dose of American Folk-Rock, you have what has been described, as “the most exciting and beautiful contemporary Hawaiian music the world knows” (Maui Times). The overriding quality of their music is one of passion, beauty and serenity, found in the majestic tones of the oli (chant), mele (song) and the exhilarating innovative sounds of virtuoso Guitar performances. “Masterful” is how Rock and Roll Hall of Fame inductee Stephen Stills describes the groups Guitar skills.

The group’s recordings have infused fearless and brilliant production while weaving unique, inventive elements of sound and textures into their intricate South Pacific tapestry. Over the years this has included adding such diverse instruments on their recordings as the Irish Uillian Pipe, Hawaiian Pahu Drum and the Electric Sitar. Guest appearances have included friend and Folk Rock icon Kenny Loggins singing in the Hawaiian Language; Internationally recognized Slam-Poet and Storyteller Kealoha; to the final recorded vocal performance by the “King Of Hawaiian Entertainment” Don Ho. “Complex, sophisticated and flawlessly conceived and engineered, HAPA concerts and recordings are as elaborate and visceral as today’s Hawaii” (Kauai Times) These disparate ingredients blended together musically in the Pacific emote the unique flavor of what Hawaii and HAPA music is: “Beautiful, fragile, spiritual, powerful” (Los Angeles Times).

Their music has appeared in countless National TV shows and feature films, and the group was showcased in a PBS Documentary hosted by Peter Fonda, who describes Hapa as “The music of my Bali Hai”. National Geographic kicked off their “Geo Sessions” music series with profiles on the group and Ben Harper. HAPA was the first Hawaii Musical act to be given to honor of being introduced and performed as themselves on the smash Television series, “Hawaii 5-0”, performing their song “Olinda Road” which closed the first season’s finale. An estimated 25 million viewers watched the show and its re-broadcast. “Since my initial move to Hawaii to appear on “Lost”, the HAPA song “Olinda Road” will always remain the Soundtrack for my Hawaii-life” (Daniel Dae Kim).

HAPA’s self-entitled debut Cd released in 1993 became the biggest selling Cd by a group or duo in the history of recorded Hawaiian music. The group’s debut Cd changed the tide and thus terminology of music from Hawaii, since it was the first Cd to establish itself outside of the musical category “Hawaiian Music” and be referred to as “World Music” by Billboard Magazine in 1993. All follow up Cd release have debuted in the Top Ten of the Billboard Magazine World Music Chart. The group’s ground breaking music has established them as the most recognized name in Hawaiian Music internationally since their debut release, continuing their 20 year touring tradition of selling out intimate Supper Clubs, Showcase Rooms, Festivals and Performing Art Centers from Tokyo to Sydney to New York.

The blend of their original vocal sound was originated on a wooden picnic bench in the beautiful little beach town of Lahaina on the island of Maui in the early 1980’s. It has travelled far in 30 years, as Rolling Stone Japan recently described them as “Titans of the Genre”. Don Ho predicted in 1993: “What HAPA means and what their message is will touch and inspire millions”.