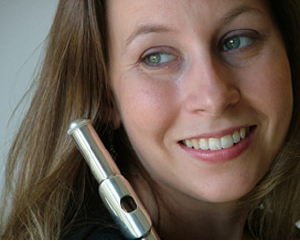 Jennifer Olson is an active orchestral and chamber music performer in the Los Angeles area. She is currently principal flute with the Stockton Symphony and second flute with the Long Beach Symphony and Santa Barbara Chamber Orchestra. Jenni also teaches flute at Citrus College and Music Appreciation at Pasadena City College. You can hear her on recent soundtracks such as The Cape, The Event, Night at the Museum 2 and Sex in the City 2. Jenni received her BA from California State University, Stanislaus where she studied with Caryl Mae Scott and received her MM and DMA from University of Southern California where she studied with Jim Walker. When she is not playing the flute she likes to conquer physical challenges.

She has been to the top Mt. Whitney twice and has hiked up Half Dome. She has completed several sprint distance triathlons and will attempt her first half marathon in August 2011.