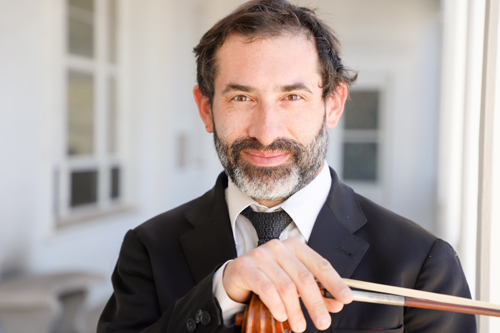 Jonathan Flaksman, born in Akron, Ohio in 1981, has been playing the cello since the age of five, with his first teacher being Madalena Burle-Marx. He has studied at the Cleveland Institute of Music under Richard Aaron, and then the Julliard School under Fred Sherry. He graduated from Mannheim University in Germany, in the class of his father Michael Flaksman, with an artist diploma in Orchestral Studies. Jonathan has taken many masterclasses, including those taught by Harvey Shapiro, Siegfried Palm, Bernard Greenhouse, Youngchang Cho, Jens Peters Maintz, Frans Helmerson, and Ralph Kirshbaum. As a soloist and chamber musician, Jonathan has traveled the United States, Europe, and Asia. He has attended the Interlochen Arts Camp and music festivals (Aspen), Schleswig-Holstein, Cividale (Italy), Łancut (Poland), Aurora Chamber Music (Sweden), and the Ascoli Piceno Festival, and performed as a soloist with the Bari Symphony at the Carl Orff Festival in Putignano. He has given masterclasses in both Italy and California and has served on the juries of various competitions. Jonathan lives in Los Angeles, playing with the symphonies of Pasadena and Modesto, composing and arranging his own works, and records for tv and film. He recently earned the Assistant Principal Cellist position of New Mexico Philharmonic in addition to winning his spot in the Long Beach Symphony. He has also been tenured as Assistant Principal Cellist of Santa Barbara Symphony since 2015.