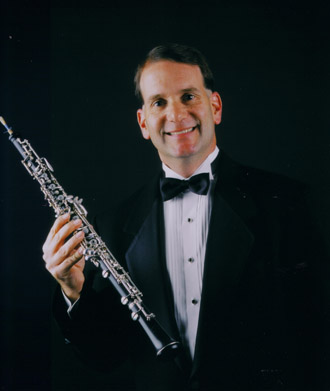 Joseph Stone is a full-time freelance oboist/woodwind player performing in the Los Angeles area on oboe, flute, clarinet, saxophone and recorders. He joined the Long Beach Symphony in 1980 during the premiere season of music director Murry Sidlin, initially performing on saxophone at Maestro Sidlin’s first Long Beach Symphony Classical Series Concert. In 1982 he won the 2nd oboe position and in recent years has been playing Principal Oboe on the Long Beach Symphony POPS! performances. Along with his wife and fellow oboist, Laura Stone, he co-founded and plays flute for the Long Beach Symphony Woodwind Quintet since 1993, which has performed for thousands of LBUSD students as part of the Long Beach Symphony Ensembles in Schools program. As a studio musician he has played on as many as eight different woodwind instruments on movie scores for The Incredibles, Ratatouille, Star Trek, Wall-E, Cars 2, Super 8, and Bad Santa to name a few, including the Academy Award winning score for Pixar’s Up. He performed on the latest albums for Neil Diamond, Ray Charles, Johnny Mathis, and Barry Manilow, plus numerous TV shows, commercials and theme park attractions for Disney. He is Principal Oboe in both the Chamber Orchestra of the South Bay in Palos Verdes and the Long Beach Municipal Band. For more than 20 years he played in the Laguna Beach “Pageant of the Masters” orchestra, spent many years working with the Long Beach Opera and Ballet, and was in the pit for quite a few productions of the Long Beach Civic Light Opera. In 2008 he toured Japan for a month with the Percy Faith Orchestra and in September 2010 he performed live on National television with Neil Diamond for the Stand Up to Cancer Telethon.

Mr. Stone is a graduate of University of Southern California with a B.M. and a M.M in Oboe Performance where he studied with William Criss and Harvey Pittell. He is currently an adjunct Professor of Oboe at California State University Long Beach and teaches oboe, clarinet, and saxophone at Whittier College.