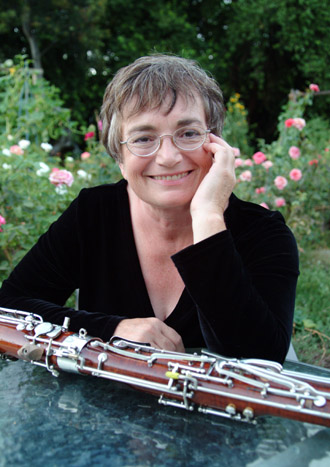 Julie Feves is a graduate of the Juilliard School of Music. She has performed extensively as a soloist, chamber performer and orchestra principal in music ranging from the baroque to the avant-garde. The New York Times has praised her “virtuosic flair” and The San Francisco Examiner admired “the sureness of her pitch and the tenderness of her phrasing.” Ms. Feves has appeared with numerous orchestras throughout the United States, including the Los Angeles Chamber Orchestra, the American Symphony, the Los Angeles Philharmonic, and the Aspen Festival Orchestras. Currently Ms. Feves serves as principal bassoonist with the Long Beach Symphony. She has performed contemporary music with the New Century Players, Speculum Musicae, and the Contemporary Chamber Ensemble. Performing on early bassoons, she has worked with the Philharmonia Baroque Orchestra, the Los Angeles Baroque Orchestra, the Mozartean Players, and the Pernucio Ensemble. As a chamber music artist, Ms. Feves performs regularly her Baroque group, Bach’s Circle and with the new Long Beach Chamber Players. She appears regularly with Chamber Music Northwest in Portland, Oregon. She has also appeared with Music from Angel Fire in Angel Fire, New Mexico, with the Bravo Colorado Music Festival in Vail, Colorado and as a guest artist with the Lincoln Center Chamber Music Society. She has recorded for Delos, Columbia Records, Nonesuch, Harmonia Mundi, Leonarda, Nine Winds, and the AudioQuest labels. She is also active as a recording musician for major motion picture and television studios in Los Angeles. Currently Ms. Feves serves as Associate Dean and Director of Instrumental Performance programs in the School of Music at the California Institute of the Arts.