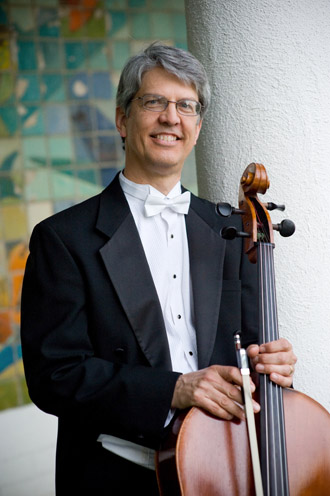 Cellist Kyle Champion has been a contracted member of the Long Beach Symphony since 2007, after working 10 years as a frequent substitute with the orchestra. He is currently principal cellist with the Redlands Symphony, and has performed with numerous area orchestras including the Pacific Symphony Orchestra, Los Angeles Opera, San Bernardino Symphony, Pasadena Pops Orchestra, and South Bay Chamber Orchestra. Kyle was a member of the American Sinfonietta, under the direction of conductor Michael Palmer, joining the ensemble on three European tours, participating in their Summer Music Festival in Bellingham, Washington, and can be heard on their Mendelssohn CD on the Summit Records label, and the Beethoven in Bellingham CD with renowned pianist Garrick Ohlsson. In addition, he served as artist/faculty at the Wintergreen Music Festival in Charlottesville, Virginia. He rounds out his performing schedule playing chamber music recitals with the cello quartet Quatracelli!. Kyle has twice been featured soloist with the Redlands Symphony Orchestra, most recently performing Beethoven’s Triple Concerto in 2007.

Kyle has been instructor of cello at University of Redlands since 1995, and has served on the faculties of La Sierra University, California State Polytechnic University, Pomona, Oklahoma City University and Oklahoma Baptist University. He is also the co-founder of the Chamber Music Academy of Southern California, presenting chamber music classes for young musicians from elementary to high school age. He has recently been selected as the string orchestra director for the Webb School in Claremont.

Kyle completed his Master of Music degree in cello performance at the University of Southern California, where he was a student of Ronald Leonard, and his Bachelor of Music degree at Southern Methodist University in Dallas, Texas, studying with Marion Davies. He has studied chamber music with Donald McInnes, members of the New Hungarian String Quartet and the contemporary music ensemble, Voices of Change.

Kyle is married with two sons, and loves reading about military history and railroads in his spare time. He plays on a cello commissioned by him, made by the renowned contemporary luthier Christopher Dungey in 2001.