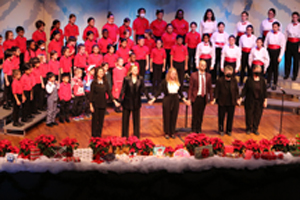 The South Bay Children’s Choir is a well- trained ensemble of young singers, ages 6-17, in residence at El Camino College. The ensemble is known for their beautiful tone, expressive singing, and inspiring performances. Founded in 1996 to provide outstanding music education and to pursue excellence in the choral art within a nurturing environment, they perform annually in the Marsee Auditorium at El Camino College and have appeared at many other venues throughout the southland, including Royce Hall at UCLA, the Dorothy Chandler Pavilion in the Los Angeles Music Center, the Wiltern Theater, Segerstrom Hall in Orange County, and the Armstrong Theater in Torrance. The choir tours both nationally and internationally, most memorably to England where they performed in the Canterbury Cathedral, so rich in history and beauty. They performed in Carnegie Hall with composer John Rutter conducting his “Mass of the Children.”

Julie Corallo, Artistic Director, a National Board-Certified Teacher, joined the South Bay Children’s Choir in 2006 as the musicianship teacher, became associate director, and now serves as the Artistic Director. As a Kodály-certified teacher, she believes that all children can learn to read music and sing beautifully. Earning her Bachelor of Arts in Music Education and her Master of Education at UCLA, she has been a music administrator with LAUSD, vocal director for several musical theater groups, and is currently an elementary music teacher for LAUSD and an adjunct lecturer at CSULB. Under her direction, the choir was invited to perform at the 2016 National Conference for the Organization of American Kodály Educators, and she was the guest conductor for the 2015 Kodály Association of Southern California Honor Festival, the Education Through Music Los Angeles Choral Festival, and the California Association of Independent Schools Choral Festival. In 2022 she was honored with the Outstanding Music Educator award from the Southwest Division of the California Music Educators Association. She has been a presenter for numerous music organizations, including Little Kids Rock (now MusicWill), California Choral Directors Association, and the Kodály Association of Southern California, and is an active member with OAKE, ACDA and SCVA.