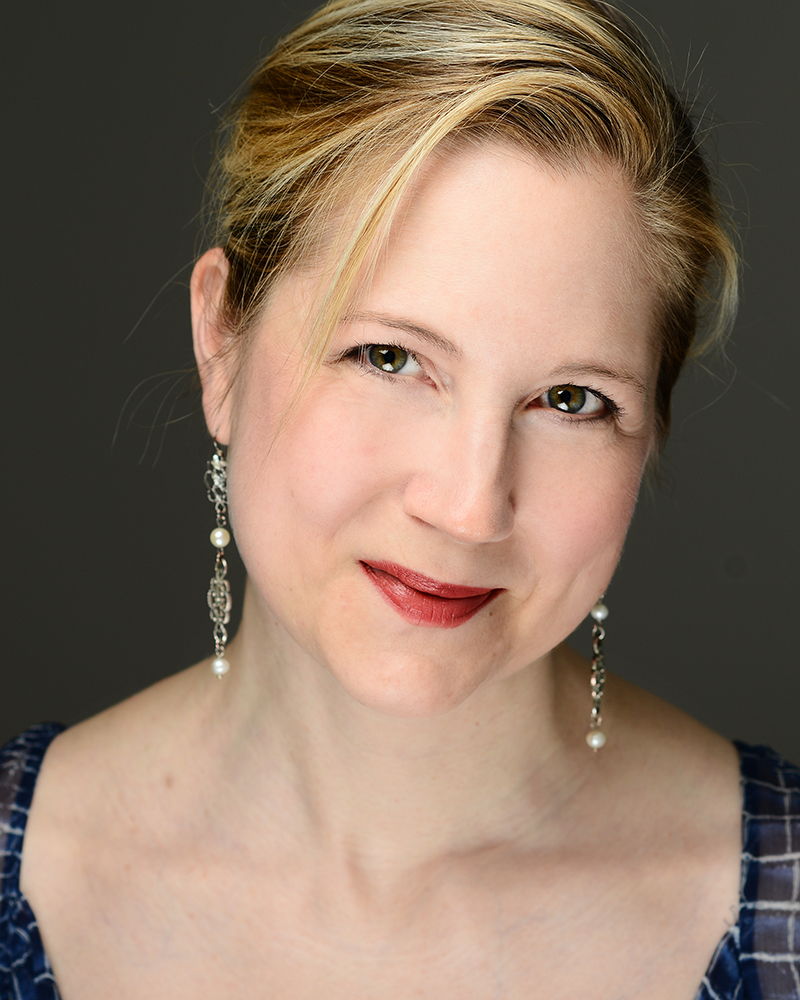 An accomplished artist, known for her colorful, clear voice and thoughtful interpretation in both oratorio and opera, Teresa Buchholz is emerging as a promising mezzo-soprano in the world of singing. Most recently she’s performed the role of Anne in Virgil Thomson’s The Mother of Us All in a highly acclaimed production that took place in Hudson NY. This Fall she was also heard in Beethoven’s Symphony No. 9 with The Orchestra Now at Bard College and performed the role of Berta in a New York City concert version of the rarely heard opera Il Grillo del Focolare by Riccardo Zandonai. Other recent performances include the role of Zofia in Monuiskzo’s opera Halka at the Bard Music Festival, the mezzo soloist in Verdi’s Requiem at the Lake Como Music Festival (Italy) and with the Spokane Symphony. As a soloist she has been heard in Bach’s Christmas Oratorio with the Rhode Island Civic Chorale and Orchestra, Beethoven’s Ninth Symphony at Lincoln Center with the National Chorale (NYC), at the Bard Music Festival on a program of verismo opera arias, as well as a staged version of Bach’s St. Matthew Passion with Gulfshore Opera (FL), Vivaldi’s Gloria with The Berkshire Bach Society (MA), and The Stamford Symphony (CT), Bach’s Magnificat with Voices of Ascension, (NYC), and Berlioz’s Les Nuits d’Été with the Bard College Orchestra. Other notable performances have included the role of Mrs. Lovett in Sweeney Todd with Opera Roanoke, Orlofsky in Die Fledermaus with Asheville Lyric Opera, Verdi’s Requiem with the New Jersey Choral Society, Mozart’s Requiem with the Tulsa Symphony, the Stamford Symphony, and Voices of Ascension (NYC), Brahms’s Alto Rhapsody at the Bard Music Festival, and a return to the Gateway Chamber Orchestra (TN) for Berio’s Folk Songs.

Some of her past performances include the role of Mercedes in Carmen with Roanoke Opera, and soloist performances in Beethoven’s 9th Symphony with the Symphony of Northwest Arkansas. C.P.E Bach’s Magnificat and Haydn’s Paukenmesse with The Fairfield Chorale, Michael Tippett’s A Child of our Time with the Rhode Island Civic Chorale and Orchestra, Mozart’s Requiem with Manhattan Concert Productions at Alice Tully Hall in New York City and the OK Mozart Festival in Barltesville, OK, and return to the Bard Music Festival to perform Chausson’s Chanson perpétuelle with piano quintet, which the New York Times hailed as “beautifully sung by mezzo-soprano Teresa Buchholz”. She also performed the mezzo solos in Bloch’s Sacred Service in a series of concerts in the summer of 2012 with the Collegiate Chorale and the Israel Philharmonic with Zubin Mehta conducting in Tel Aviv, Israel and Salzburg, Vienna. The previous year she made her Carnegie Hall debut with Mid-America Productions as mezzo soloist for Durufle’s Requiem.

After a successful solo debut with The Bard Music Festival in 2008, Teresa returned to the festival in August 2009 for a performance of Hans Eisler’s Tagebuch cantata. Other performances for the 2009-2010 season included solo engagements with The Duke Symphony (Dorabella in Cosí fan tutte), The Berkshire Bach Society (Bach’s Christmas Oratorio), and The East Texas Symphony (Handel’s Messiah) and a role with Teatro Grattacielo at Lincoln Center’s Rose Theatre (Serena in Wolf-Ferrari’s I Gioielli della Madonna).

Other appearances include a performance of Brahms duets (op. 20 and 61) and a Rhinemaiden in a concert of Wagner opera excerpts with the Bard Music Festival, the second soprano solos in Mozart’s Mass in C Minor with the AmorArtis orchestra in Norwalk, CT, as well as solo recitals at Messiah College in Pennsylvania and St. Bartholomew’s Church in NYC. Summer ‘08 marked her debut with Summer Opera Theatre in Washington DC as Carmen, where The Washington Times hailed her as “an outstanding Carmen, singing accurately and expressively while charging her character with smoldering sexuality.” Following that, her performance of Prokofiev arias for the Bard Music Festival was noted in the festival’s overall review in the New York Times. In 2008 she also debuted with Asheville Lyric Opera and The Opera Company of North Carolina as Alisa in a shared production of Lucia di Lammermoor. In April ’08 she returned to The Duke Symphony Orchestra for the role of Hansel in Hansel and Gretel, where her Cherubino in La Nozze di Figaro was greeted with enthusiastic acclaim in ’06, and following that in May of ‘08 she returned to the Berkshire Bach society for the role of Orfeo in a semi-staged performance of Gluck’s Orfeo ed Euridice.

As an experienced oratorio soloist, Teresa has had past appearances with the Fordham University Choir for Mozart’s Requiem, and with the New Jersey Philomusica as Alto Soloist in Michael Haydn’s Requiem and Mozart’s Dominican Vespers. She has also been heard with the Bard College Symphonic Chorus as Maria in Respighi’s Laud to the Nativity and at Lincoln Center with the American Symphony Orchestra in Franz Schreker’s opera Der ferne Klang and Schumann’s oratorio Das Paradies und die Peri. She has appeared frequently with the Berkshire Bach society, where her appearances have included Handel’s Israel in Egypt, Pergolesi’s Stabat Mater, and J. S. Bach’s Magnificat, Cantata BWV 72 (“Ich habe genug”). Other notable performances have included Mozart’s C minor Mass and J. S. Bach’s Mass in b minor, both with the Chorus and Orchestra of St. Bartholomew’s Episcopal Church of New York City, and Pergolesi’s Stabat Mater with the New York Collegiate Chorale. In making her Lincoln Center debut, Teresa was featured with the American Symphony Orchestra and Maestro Leon Botstein in a one-act opera by Paul Hindemith entitled Das Nusch-Nuschi.

A graduate of the Yale University Opera Program, Indiana University, and the University of Northern Iowa, Teresa has been delighted to have spent several summers as a young artist with the Santa Fe Opera, the Opera Theatre of St. Louis, and the Natchez Opera.